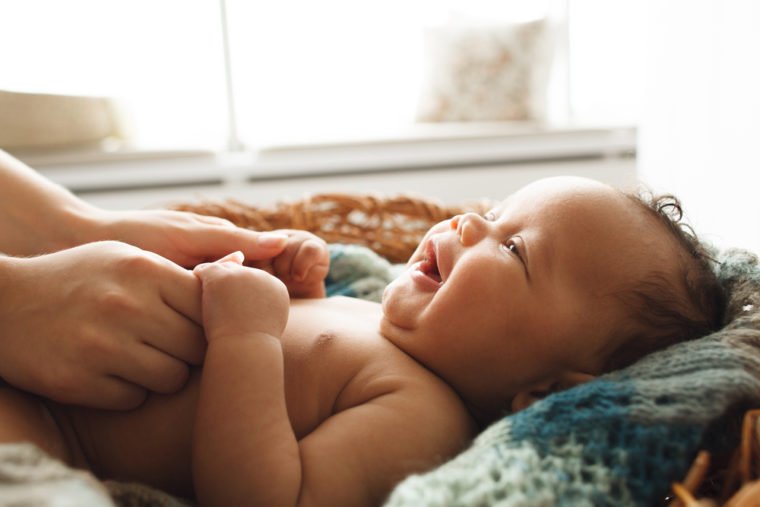 Maybe you noticed that, during his first month, your baby spent most of his time sleeping and eating. That’s totally normal, but, as time goes by, you’ll see he becomes more alert.

He will be awake for longer periods of time and, because of that, you’ll see changes in your little one’s behavior, especially in his capacity to pay attention and communicate with the people around him.

During your baby’s first month of life, the most efficient way of communicating with you is by crying. However, in the second month, you’ll see that he starts to use other methods to let you know how he’s feeling and what grabs his attention. For example, by turning his gaze or listening to certain stimuli. Sometimes it will seem as if he’s listening to you since his ability to recognize certain sounds and familiar voices is developing. Also, maybe he’ll look at you when you hold him and, sometimes, he’ll move to react to stimuli that he finds interesting.

After the first month, your baby will become more receptive and will be more alert. His ability to pay attention will increase and he’ll become fond of human faces and voices. Also, he will be able to observe objects that are one foot away (20-30 cm), especially those that are colorful, bright, or make a sound. He will start looking for the source of the sounds as well by moving his head in that direction.

Also, from this age, your baby will surprise you with his first social smiles and other cute gestures. But he’ll also try to let you know when he is bored, annoyed, or loses interest in an activity.

This stage is a great opportunity to interact more with your little one. His greater capacity of attention will allow you to do more activities and see how he responds to them. This will be vital for the development of new skills. From now on, you’ll be the focus of his attention, which will give you the chance to strengthen the quality interactions you have with him.

Lastly, remember that your baby’s development might not be exactly the same as the development of other kids; sometimes children can take longer or are ahead of others. These new skills can also show before or after the months we’ve mentioned in the article. However, don’t forget to keep stimulating your little one to favor his development. What’s important is that he learns at his own pace and keeps progressing.

• by: Molly Dresner
Molly Dresner has new and fun ideas to help our kids develop their ability to follow instructions. Since they are still very young, children need cues...
Child Development