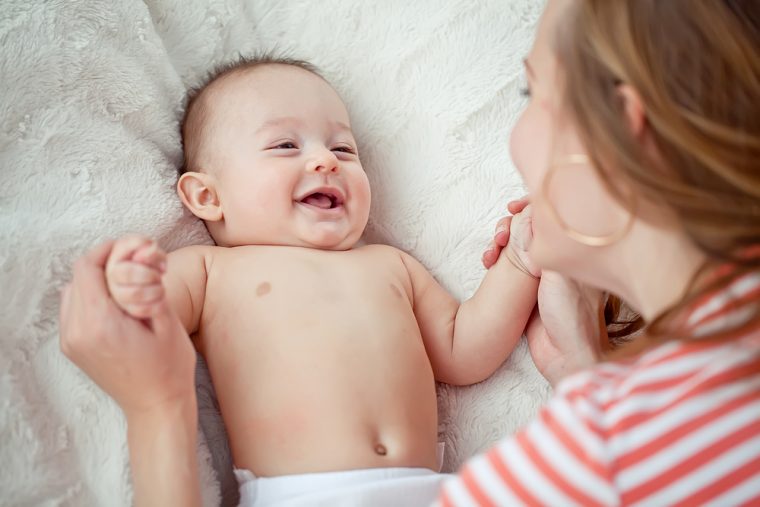 Why does my baby have clenched fists?

It’s amazing how fast babies learn and achieve new things! In the motor development area, you’ll see that your son will reach certain milestones during his first few months. Newborns come into the world with a series of survival reflexes and they are more capable than we think. Some of these reflexes disappear after a few weeks, while others become voluntary and directed movements.

If you are new parents and your baby is just a few months old, you’ll notice that he keeps his hands in clenched fists. Your little one is still comfortable staying in the same position he adopted in the uterus: keeping his arms and legs close to his body and his hands in a fist. For now, your baby can’t control many of his movements and you’ll see that, if you caress his palm, he’ll immediately grasp your finger as an automatic response. It’s amazing how someone so small can have such a strong grip! This reflex will show after birth and continue to manifest itself until your baby is 5-6 months, since, little by little, he’ll learn how to control his hands.

When your little one is 2 months old, you’ll see that his movements start to be more fluid and less abrupt. This is due to his nervous system maturation during the last couple of weeks. Even though his finger mobility is still limited and he keeps his hands in a fist, your child will start to move his arms in front of him. He’ll do it whenever he is excited and he may start bringing his hands to his mouth to suck at them. It will be exciting to see his progress!

Your son’s ability to open his hands will be progressive. When he is 3 months old, maybe he’ll try to reach for objects voluntarily, even though he won’t be able to hold them properly and that will frustrate him. If you hang something in front of him, he’ll try to grasp it and, in a blink of an eye, he’ll develop his grasp control and will start reaching for things and holding toys. Although the evolution of the palmar grasp reflex from an automatic response to a voluntary action will take a few more weeks, your son will start to relax his hands and spend less time with his fists closed.

When you see that your baby starts doing this, make the most of it and play with him! You can hang small attractive toys in front of him and encourage him to move his hands. When he is able to open his palms, give him things to hold. Remember to celebrate each of his achievements!

Other newborn reflexes that you’ll be able to observe in your son are the Moro reflex (which is a response to being startled), moving his legs as if walking when he feels a hard surface under his feet, moving his head looking for the nipple or the feeding bottle, squeezing his toes when you touch his sole, etc. Remember that each baby develops at his own rhythm and that not everyone presents and loses all reflexes at the same time. Your pediatrician will test all the newborn reflexes in your son’s first medical appointment, but, if you have any doubts or concerns, don’t hesitate to ask.

• by: Olivia
Physical development occurs rapidly during the first two years of your little one’s life. That’s why you’ll see him grow at a steady pace. During...
Child Development

Your baby’s first movements and coordination

• by: Sofía Martínez
We’ve previously talked about how your baby’s vision is one of her main tools for learning and taking in all sorts of information about the world...