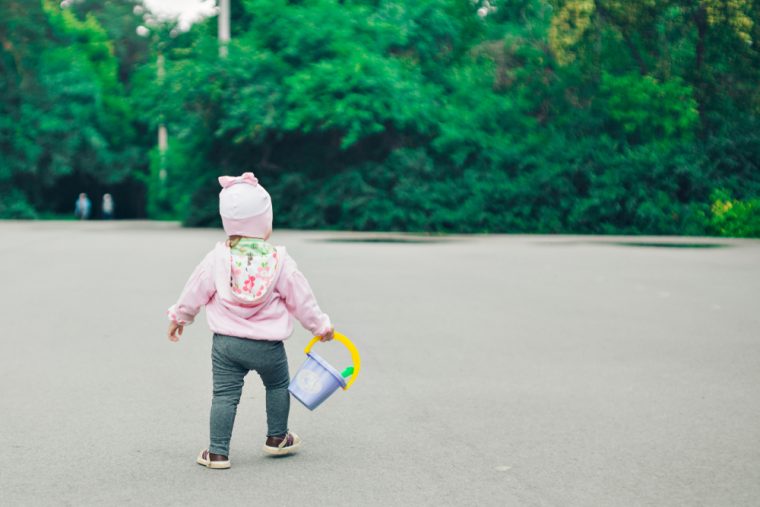 Having the chance to witness your little one’s first steps is an amazing experience!

We’ve previously talked about the importance of reaching certain milestones like standing up or crawling. Today we chose a very exciting topic that’s very important when your daughter is taking her first steps: pushing and pulling objects to keep balance.

It may seem that holding an object while walking could be complicated for your little one. If she’s barely walking, you would think that doing two things at the same time might affect her balance. Turns out it’s exactly the other way around! Research shows that carrying an object may actually improve her balance.

In a recent study, the researchers took the time to observe fifty 13-month-olds in their own homes, paying special attention to the holding of objects while walking or crawling. Turned out, walkers rarely fell while holding objects. Actually, 90% of the walkers carried objects while walking for no apparent reason and their falling decreased while doing so; they fell twice as often when not holding objects.

The toddlers showed improved balance control while carrying an object. But why? A possible explanation is that holding on to something may have given them confidence. This could have a similar effect to holding on to the surface of furniture. Besides this benefit, spontaneous carrying can provide a great opportunity for children to combine manual and locomotor skills, while interacting with their environment.

Here are some ways in which your little one might put surrounding objects into good use when giving her first steps:

If your child is currently working on her crawling skills, you might observe the following carrying positions:

This is good not only for the skill of walking, but for the cognitive and social development of your little one. Practicing this gives her a chance to learn about object properties and how to engage in new ways with the world. Try to have a basket with toys and objects for her to hold on to near by!

More on the study here.

How to foster your child’s physical development and musical skills

• by: Sofía Martínez
Do you remember that at school you had math, science, music, and P.E classes? Music, like any other subject, plays an important part in a...