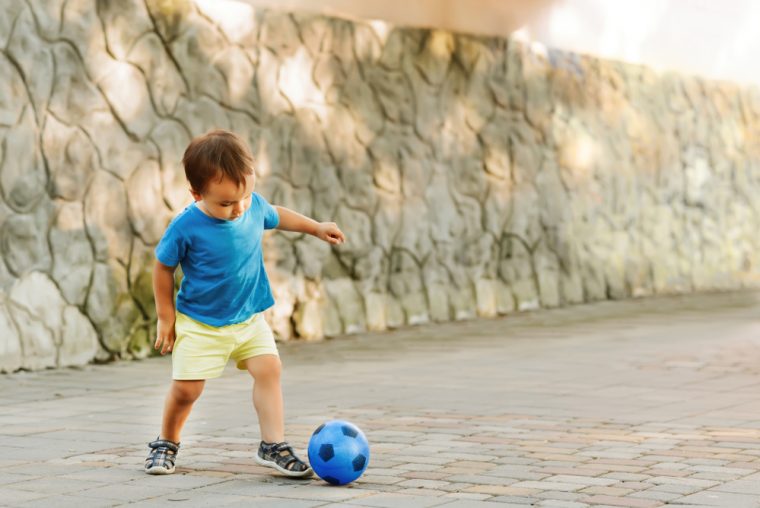 Each of your child’s new accomplishments will be a reason for celebration! Just as you were delighted when he managed to hold his head, sit without support, take his first steps or say his first words, you’ll also be surprised and will cheer when he is able to kick a ball and maybe even score a goal.

Children are capable of kicking a ball when they’re around two years old. Even if it seems to be an effortless action, kicking is actually a complex and basic skill that children master as they grow, and it is an important physical and motor milestone. To achieve it, your son must have gone through a process where he acquired several skills that allowed him to control his body. In this article we will talk about how this skill is developed.

Everything begins when your son is a baby. Although he can’t walk or even stand up by himself, his legs will start to strengthen. At two months, he’ll kick as an involuntary reflex. Then, between 3 and 4 months old, you’ll notice he kicks toys and objects near his feet intentionally. Also, his strength will have increased allowing him to bounce if you hold him upright.

Throughout the months, his legs and muscles will continue to get stronger. Your baby will be capable of standing up, take his first steps, and, before you know it, he’ll be walking without any help! At the beginning, his steps will seem uncoordinated, but little by little he’ll perfect the technique and walk with more confidence.

Once he masters the skill of walking, he’ll learn how to kick a ball. This happens around 14 and 15 months of age. When that moments arrives, you can play with your little one by putting a ball near his feet so he can practice kicking it. It will be an exciting game! Maybe at first, you’ll need to hold him upright to avoid falling down. However, after a few weeks, you’ll see he will be doing it by himself.

Months later, around 18 months of age, your son will perfect his ability to kick. Now, he’ll be able to run towards a ball and kick it. This activity will be very fun, and you can use it to play with other family members or friends. Put a ball on the floor and ask your child to run towards it and kick it, as if he was doing a penalty in soccer. After he turns two, by his 26th month, he’ll be able to kick a moving ball and participate in more active games.

Even if he masters this skill, he’ll continue perfecting it! Soon, your child will be able to kick a ball towards a specific direction. You’ll see that, if there are objects near him, he’ll knock them down by directing the ball towards them no matter if they’re at his right, left, or in front of him. This usually happens at 2 and half years old, and, even though he’s still young, if he really enjoys it, he’ll be able to participate in a soccer match with his peers. If you prefer doing other kinds of activities, you can practice kicking balloons or play bowling by knocking things down with a ball. Your child’s development, aside from being a gradual process, will be very exciting. Your son won’t just learn to kick a ball, he’ll also practice other skills that involve balls, such as running, jumping, catching, and throwing.
Remember that each kid develops at his or her own pace and that it doesn’t matter if your child acquires the skill of kicking before or after the months we mentioned. What’s important is that he reaches this milestone and that you’re there to cheer him up and celebrate his accomplishments.

For more information about this topic, read:
• How Active is Your Baby?
• Movement and Coordination
• From Motor Skills to Sports Skills

Hello Nargiza! Of course, they do! We randomly choose a gender for each of our articles. You’ll see that in other articles we use “she”, but it applies to both genders =)

• by: Kinedu
Motor development is a sub-domain of the Physical Developmental area. Look out for the rest of the area's articles! Motor skills, like everything else, are learned and...
Child Development