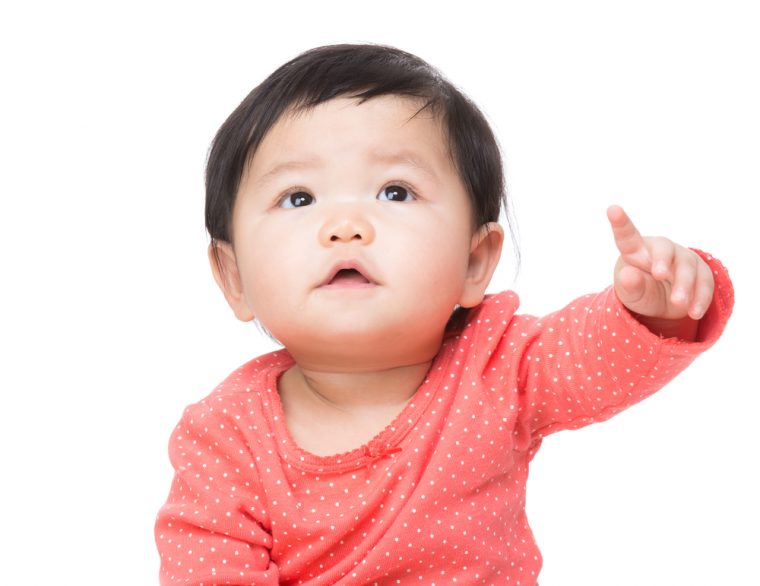 Pointing as a precursor of language

Your baby learns about language well before she speaks; she might even have a head start because she listened while being in your womb. During her first year, the linguistic area will development a lot. You will see her communicate through gestures, coo, and even laugh.

Nonverbal communication is very important, because your little one doesn’t have the ability to communicate her wants and needs through words yet. That’s where pointing enters the scene. It is one of the earliest ways in which babies communicate before being able to put their intentions into words. This action can begin when children are between 9 and 18 months old.

Pointing might seem simple, but it’s not. Recent studies have been able to propose some interesting theories about pointing in toddlers. One study, carried out in Germany, analyzed 12-month-olds when pointing. Results showed that when the adult shared attention and interest, infants pointed more frequently than when the adult didn’t pay attention.

This tells us that your little one can point to share her thoughts with someone else, and even try to influence them with this simple gesture. She wants to share her world with others. Ponting builds a strong prelinguistic foundation and can be also interpreted as a skill that carries a social intentionality.

Your little one can point with different objectives in mind. She can refer to events in the past or the future, “talk” about things that are no longer there, deduce when you want to communicate something by pointing, and, most of all, share her experiences. There are three kinds of pointing, depending on the intention.

Pointing has different intentions, so your little will use this resource a lot during this stage. To help her develop pointing, model the behavior yourself. When talking about an object point at it. You will see how she starts to spontaneously do it herself. You can also encourage her by reacting to her pointing; ask questions, laugh, or get her the objects she points at.

Pointing is your little one’s first way of sharing with you. You are the most significant adult with whom she will interact and communicate. The way in which you engage with her will support her language development during these very important early years. That’s why, pointing is a milestone that will set her way to language development.

Studies on pointing:
• Twelve-month-old’s point to share attention and interest
• A new look at infant pointing

• by: Caro
We all know that each person has a different personality, and that some are more sociable and others more shy. We even notice these qualities...