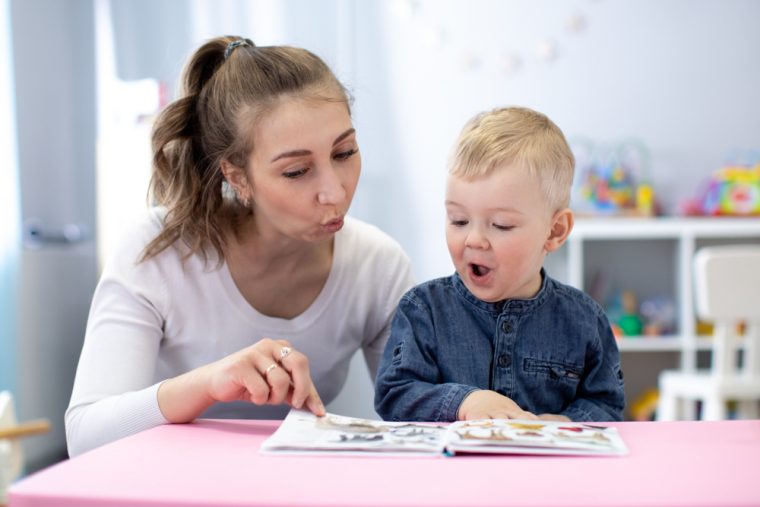 Pronunciation in your little one Part 2

In Part 1 of this article we briefly referred to the process of pronunciation. Now, we want to explain in more detail the most common consonants that your child will work on between his 18 and 36 months.

Around 19 months, your child might begin to pronounce the “m” as a beginning sound, and then continue with “p”, and so on. Let’s take a look at the type of articulation each one represents. Keep reading to learn more.

These will be some of the firsts consonants your little one will pronounce. In an alveolar consonant, the tongue tip approaches or touches the ridge immediately behind the upper teeth, known as the alveolar ridge. Your little one has to raise his tongue and touch the hard area behind the teeth, without touching them.

To help him improve his pronunciation of “t” and “d”, have him practice this movement with the tongue to make strengthen it, while pronouncing the letter. Make sure he understands it’s located right behind the teeth. Some scientists state that without emitting language sounds the exercise is not as effective.

You can also try changing beginning sounds. Tell him a word and ask him if he can change the beginning sound. For example, ask if he can say “dime”, repeat it several times to make sure the pronunciation is right, and then ask him to change the “d” for a “t”. He will be practicing pronunciation, while also working on phonemic awareness and spending time together. You can also work on basic babbling sequences like “da-da-da”, using big up-and-down jaw movements. Repetition will help him improve this skill.

For the letter “n”, the tongue needs to touch the alveolar ridge or hard palate, while blowing air from your nose. You can have a little game to see who is blowing more air through the nose, while pronouncing the sound of letter “n”.

In a bilabial consonant, the lower and upper lips approach or touch each other when making the sound. In this group, “b” and “p” are pretty alike; to pronounce them your little one will need to close his lips and then release the air by opening them. As it happens with “t” and “d”, your vocal cords will vibrate only with letter “b”, so in this case you can repeat the throat exercise, to help your kid identify the difference.

Another idea you can try to keep practicing is playing “mirror”. Place yourself face to face with your little one and explain that in this game he has to copy everything you do. Exactly like a reflection, start to pronounce the “p” and repeat it while he imitates you, then proceed to “b”. Exaggerate your pronunciation, so he can see the difference between the two sounds and practice it while imitating you.

For letter “m”, close your lips and blow air from your nose simultaneously. Explain to your little one that the most common error when pronouncing “m” is not closing the lips. You can repeat the air blowing exercise used for “n”.

One of the first palatal consonants your son will pronounce will probably be “y” as a beginning sound. This can happen when he is around 28 months old.

The articulation of this consonant happens when the body of the tongue touches the hard palate. He might start to use words like “yes” or “yeah”. You can set an example of how to use these words very early on and model the pronunciation. Have him practice! Ask questions that you know he will have to answer with an affirmation; if he uses gestures invite him to elaborate with words.

You can also implement “yeah” as a celebration. When something very exciting happens you can both scream “yeah” while holding your arms up in the air; this can even become your little tradition.

These ones might appear later on, at around 30 months old. Regarding articulation and movement, “k” and “g” are very similar. They are called velar consonants because, in this case, the body of the tongue approaches the soft palate that is located in the back, or velum, while building pressure inside the mouth and releasing it by a sudden lowering of the tongue.

The difference between “k” and “g” consists in the vibration of the vocal cords. To help your little one notice this, you can repeat the same exercise of touching his throat. You can also give him some words to practice together. For example, if he likes animals, you can choose “koala” and “gorilla” and have him use them in a sentence. This way you are not only working on his pronunciation, but also in language production and even memory!

This type of consonant is one of the last ones to appear, before moving to more complex consonants. You might notice your little one using “f” when he is around 33 months old. This is a pretty straightforward consonant; it’s articulated when the lower lip approaches or touches the upper teeth.

You can work on this with your little one with the “mirror” game. Remember to exaggerate the gestures, so he can analyze with detail how to imitate the movement of teeth and lip.

Most of all, expose him to all kinds of language. Talk to him, read bedtime stories, and have enriched conversations. Recent reviews of different speech therapists show that there’s no real proof of a connection between exercises of lip and tongue movement and the improvement of speech; this improvement appears only with practice.

Have fun doing some of these games and stay close to your little one during this amazing process!

More on language: Language Milestones: Others can understand what my daughter says

Pronunciation in your little one Part 1

• by: Olivia
From day one, your little one has been taking in everything around him. Even before he was born, he was absorbing everything he was listening...
Child Development

• by: Sofía Martínez
We’ve previously talked about what you can do to enhance your child’s language development and about findings of how the way you interact with your...