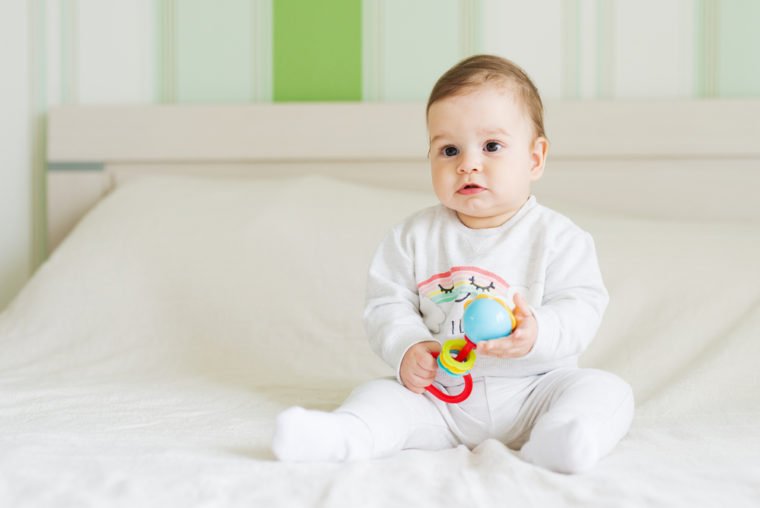 Remember when your baby was born? Probably you recall his first days or weeks and, if you compare him to the baby he is now, you’ll see a lot of differences.

He is no longer that newborn that spent most of his time sleeping since he is now alert and eager to interact with his surroundings. He has become an active and receptive baby that reacts to the world around him.

If your baby is between 3 and 5 months old, he has probably achieved some important milestones such as greater voluntary control over his body, lifting his head and chest while facing down, supporting the upper body using his arms, stretching his legs, kicking, and opening and closing his hands. All of these will allow him to get closer to the objects that call his attention.

Usually, babies can hold small objects when they’re 3 months old. At first, you’ll need to help your little one by placing the objects in his hand. But later on, at around 5 months of age, he’ll start looking for things and will want to grab them voluntarily. The first sign you’ll notice about this new interest is that your baby tries to grab things that are out of reach. This is a great advance since it will allow him to develop the capacity to move independently. To help him move more and try to reach for the things he wants, place your baby’s favorite toy a little out of reach, and encourage him to take it. Also, you can move the toy from side to side, so that your baby rolls to get it.

This new interest won’t only allow your child to develop his movement capacity, but also other cognitive and linguistic skills. Take this opportunity and, while your baby is learning how to gab the things he is interested in, start naming them. Right now he won’t be able to repeat the words, but you’ll stimulate his ability to recognize objects by verbal cues. Later on, when he learns how to speak, he’ll use this vocabulary to ask for what he wants.

Remember that, even if it seems like a simple task, grabbing objects requires a lot of hand-eye coordination. So, after holding small objects, it’s normal for babies to take several months before they can do it on their own. Don’t worry if your little one has reached this age and he hasn’t mastered this skill yet. These developmental differences among children are more common than you think. However, if you think your baby has difficulties developing his motor skills, it’s best to talk with your pediatrician.

• by: Ana Sofia
Babies are born scientists. They develop theories about how the world works and constantly learn through observation, exploration, and their own experiments with their environment....
Child Development

• by: Olivia
We learn when we experiment, and during early childhood exploring new environments and having a chance to understand them is key to learning. When you...
Child Development

• by: Olivia
We have referred to the importance of curiosity before and have given recommendations to keep it alive. Today we will talk about a specific curiosity...