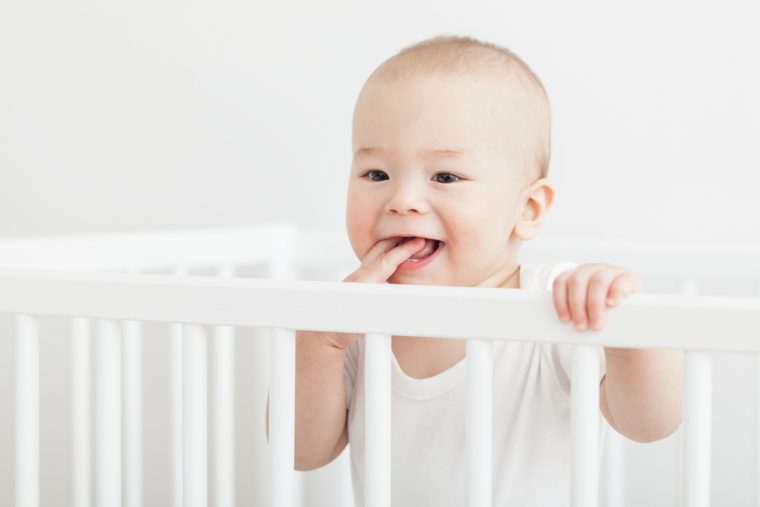 Standing up might seem like an easy task, but for your baby it implicates a lot of skills. From day one, by reaching each milestone he’ll be taking a little step to move forward. At the very beginning, you’ll see him work hard just to hold up his head and, as time goes by, you’ll notice how his muscles get stronger day by day.

In this article, we want to discuss about a very cool milestone you’ll see in your little one’s physical journey: standing up. This process might take place between 9 and 14 months and is a precursor of other motor skills, such as walking, running, and jumping. Standing engages most of your little one’s muscles and requires impressive fine tuning in order to balance himself. This is why he has to wait almost until his first birthday to get off the ground.

Standing might seem like a simple milestone, but if you take into account that it uses most of his muscles, you’ll understand that this one achievement involves the acquisition of different sets of skills.

Let’s talk about what you might observe in your little one’s process, starting with the most common skills that you’ll begin to notice around 9 months of age.

Pulls himself up to stand, holding on to furniture

One of the first things you might notice is when your little one starts to pull himself up when grabbing onto furniture. For this to happen, he must’ve developed his reaching skills beforehand.

How can you support him to work on reaching? You can hang some dangling toys in front of him, while he is on his seat and encourage him to reach out for them. With time and practice, you’ll see how he starts dominating this skill. Being able to hold on to something is very important and will make your little one feel safe enough to begin pulling himself up.

He might need some help at first, but you’ll see how he will be able to do it by himself before acquiring more complicated skills, such as kicking a ball, keeping his balance for longer, or giving his first steps! This exercise of pulling himself up contributes to the strengthening of arms, neck, core, and leg muscles. Furthermore, when keeping the position, he is also practicing how to distribute his weight and strength, fostering his balance.

After a while, he will start holding on to tables, chairs, and other furniture, always looking for objects that adapt to his height. Make sure the furniture around him is safe and that nothing can tumble and fall.

Once he has managed to pull himself up, you can start placing his favorite toys just a tiny bit out of reach on top of safe furniture and encourage him to grab them. This way he will keep exercising the necessary muscles to accomplish a standing position.

It is also recommended to give him some free-range playtime. Give him a chance to explore and foster his curiosity when holding on to different surfaces and heights. Soon enough, he’ll experiment with letting go for a few seconds. We’ll tell you more about this later.

Can go from sitting to kneeling

Your little one keeps getting stronger by the day! Now, we want to talk to you about another cool milestone that he will reach while learning to stand up. As the previous skill, it can also appear around 9 months of age. At this point, he might be gaining better control of his movements.

One of these new controlled movements consists in him changing from a sitting to a kneeling position. Sounds easy, but can you think of a moment when you have done this without involving your arms? To be able to control and repeat this movement, the strengthening of the leg and core muscles is fundamental.

How can you help him obtain the necessary strength? You can do some bouncing exercises with him, in which you hold him by the torso over a surface and help him bounce. You can also pull him to a standing position and then help him sit down by lightly placing him back on the floor.

The first few times he tries to stand up by himself he might end up moving from sitting to kneeling; with no standing. This is part of the process, let him practice as much as he can. Let him move freely while staying by his side.

More on standing up:
– My baby wants to stand up during bath time
– Baby on the move: Learning to stand up

• by: Olivia
In Part 1 of this article, we discussed some of the first milestones your little one will accomplish. Now we’ll give you a small insight...
Child Development

Your baby’s posture and muscles

• by: Olivia
We have already discussed the importance of muscle development and how it can influence your baby’s physical milestones. Today we decided to give special attention...