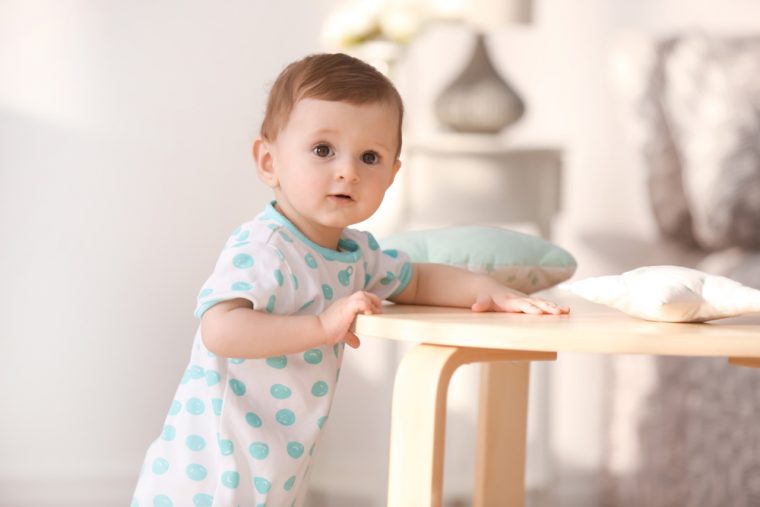 In Part 1 of this article, we discussed some of the first milestones your little one will accomplish. Now we’ll give you a small insight of what you might notice when he is between 10 and 12 months old. Let’s discuss what comes next!

Remains standing while holding on to something

We previously talked about how your little one will start pulling himself up when holding on to furniture. At first, he might do it and the fall immediately back down. But soon enough, you’ll be lucky enough to witness how he keeps a standing position while holding on to something.

This is a major step in the acquisition of this skill. He is exploring what it feels like to have his feet on the floor and carry his weight on his tiny legs. While he does this, he is also practicing his balance and proprioception skills. Keep a safe environment for him to feel confident enough to try his new moves and let him do it by himself; even though you’ll be right next to him, try not to interfere.

This skill might emerge at around 10 months and, before you know it, he will be moving and cruising around while holding on to things, getting closer and closer to taking his first steps.

This skill is very related to the previous one and will also appear around 10 months of age, but instead of him holding on to an object, your son will hold your hand for support. This a beautiful moment and an excellent chance to start working on tiny transitions towards standing independently. Your support will play a very important part in this process.

When you hold his hand, he feels safe; and since he is now holding on to something that moves, it is harder to keep the position. This a great opportunity to practice balance together.

Hold his hand gently and pull him to a standing position. You can repeat this exercise many times and, as time goes by, try to gently start letting go. This way he’ll improve his balance and, one day, when you take your hand away, he will keep his balance all by himself. Later on, you can also move forward when holding his hand to see if he takes a step.

When standing up with help, he is also strengthening his leg and core muscles, stretching his hips, and getting used to putting weight on his feet. It’s a big step!

Goes from standing to sitting without your help

We’ve discussed on Part 1 of this article about the importance of going from sitting to a kneeling position. Now, we’ll address something that comes around a little bit later, at around 11 months of age: going from standing to sitting without help!

This is a milestone your little one will accomplish once his muscles are stronger, since it needs more balance and coordination than the previous ones. He will probably start by pulling himself up, keep this position, and then bend his knees slowly until he reaches a sitting position.

It seems easy, but for him to be able to move from standing up to sitting down, his balance skills have to be more advanced and he must’ve developed enough spatial awareness to calculate where he’ll land.

While doing this, he is also exploring his new moves. A little bit later, he’ll start taking sliding steps while holding on to whatever is around for support, and then sit down to play on the floor. Make sure that when he is at this stage, the objects around him are stable enough for him to put his weight on them without falling over. This milestone will allow him to move around and get objects from faraway places, a great precursor for walking. At around 13 months of age, he might be able to do it the other way around and accomplish going from a sitting to a standing position, which requires a little bit more strength and balance.

At this stage, your toddler is experimenting with balance every day. At first, he will need to hold on to something, either furniture, objects, or your loving hand. But in the blink of an eye, he will be able to hold a standing position by himself. Witnessing this amazing milestone will be very rewarding! Be sure to keep your arms ready in case you need to catch him.

• by: Olivia
Standing up might seem like an easy task, but for your baby it implicates a lot of skills. From day one, by reaching each milestone...
Child Development

The not so simple action of standing up PART 3

• by: Olivia
In Part 1 and Part 2 of this article, we discussed some of the first milestones that your little one will accomplish when it comes...
Child Development

• by: Sofía Martínez
Since he is born, you and your child will embark on a journey that will go from him grabbing your finger to climbing on the...