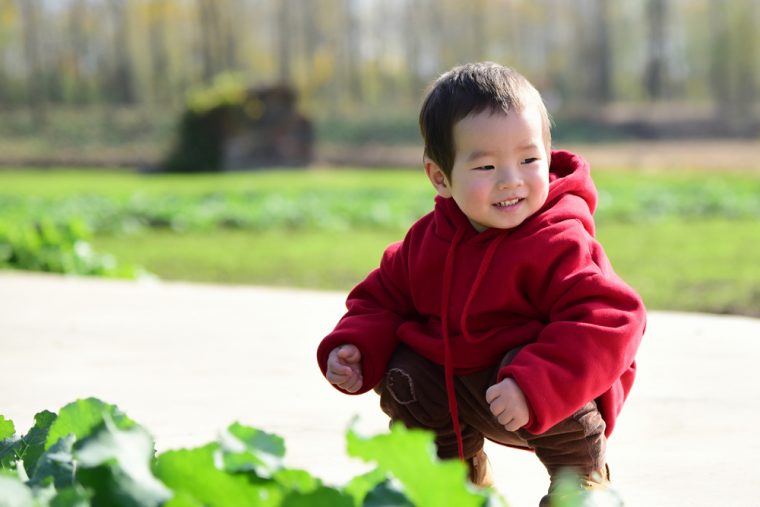 The not so simple action of standing up PART 3

In Part 1 and Part 2 of this article, we discussed some of the first milestones that your little one will accomplish when it comes to standing up. Now, we’ll continue with the ones that he will accomplish later on. You will probably notice these when he is between 12 and 14 months old, and some might even be accompanied by his first steps!

Goes from standing up to squatting

This means your little one has developed a great amount of balance! He’s been working on it for a while now, and it’s not such an easy task.

At this age, your son’s center of balance is located on a different spot than ours. Why? It has to do with his head; it represents a larger percentage of weight than it does in the body of an adult. He needs to have strong neck muscles to keep his neck straight and center his head. All that tummy time will be paying off!

This is related to the emblematic squatting position toddlers can perform. You have probably witnessed occasions in which your child is standing up and then spots something interesting on the floor that triggers his curiosity. He will try to reach the object and grab it from the floor. To do this, he’ll bend his knees all the way, squatting to a position you might find impossible to reproduce yourself!

This is also a major move towards independence, as he can now grab toys and objects on his own. There’s not an actual need to teach him how to do this, it will naturally kick in when you cover the floor with different toys. Don’t worry, he will start practicing until he is able to accomplish it all on his own.

When he is about 14 months old, he will probably manage to do it the other way around; now moving from a squat to standing. This will require even more strength! But before that, he might’ve just changed to a sitting position after squatting.

Stays balanced while standing up and playing with an object

We have discussed the importance of holding on to objects when standing or walking and how it helps your little keep his balance. With this new milestone, your little one is not only holding an object, he is playing with it! It might seem like a small change, but it takes so much more balance to be able to focus on playing, while also keeping a standing position.

After he manages to pull himself up, the next step is to keep his balance while standing up. At first, his stand might look wobbly and make you feel a bit nervous. Don’t worry, he is actually more in control that he appears to be, that’s when holding objects comes in handy. We have talked about this before.

Be careful not to take the toy away! It makes perfect sense that if you see him walking clumsily while holding an object, you’d think he is wobbling because of it. Turns out it is the other way around! Without an object to hold on to, he can go right back to being unstable. This shows that, even though he is still in development, he has more control when standing up than it may seem.

A study that followed 13 kids, analyzed their standing time, movement, and stability. They took the holding of an object as one of the variables and were able to conclude that the toddlers presented better balance when they held on to something. This ability to multitask, when balance is so new, amazed the researchers.

Stays balanced while standing without any help

It’s finally here! Now your child is able to stand up all by himself and hold that position. In order for this to happen, your little one needs enough muscle strength in his legs, hips, head, and tummy to keep his balance. These muscles have been building up while reaching previous milestones. Not all of them are directly related to standing up, but have to do with head control, rolling over, sitting, pulling himself up, etc.

You can help him reach this milestone by encouraging him to interact with other babies that are already standing up and giving him time to play freely on the floor. The more exercise he does, the sooner he’ll be strong enough to stand up!

Cheer him once he accomplishes this, so he doesn’t feel scared. If he relates standing up to clapping and excitement, he will feel motivated to keep trying. Standing up is an important precursor of walking, so stay close to your child and enjoy these beautiful moments together.

• by: Olivia
Standing up might seem like an easy task, but for your baby it implicates a lot of skills. From day one, by reaching each milestone...
Child Development

• by: Olivia
In Part 1 of this article, we discussed some of the first milestones your little one will accomplish. Now we’ll give you a small insight...